A Capsule History of Hudson – Hudson Library
Delivery of holds is delayed due to the State Library of Ohio’s new statewide delivery service. Thank you for your patience and we will continue to keep you informed. More information >>

A Capsule History of Hudson 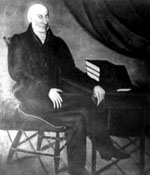 Hudson is part of the Connecticut Western Reserve, a 120 mile strip in the northeast corner of what is now the State of Ohio. Claimed by Connecticut until 1795, the land in this region was sold to potential pioneers by the Connecticut Land Company through a land lottery. David Hudson and five business partners—Birdsey and Nathaniel Norton, Theodore Parmelee, Stephen Baldwin, and Benjamin Oviatt—purchased land rights to the township designated Range 10, Town 4 in the Western Reserve.

In the spring of 1799, David Hudson led a settlement party west from his home in Goshen, Connecticut, reaching the new land on June 26, 1799.

After completing a land survey, David left a small settlement party and returned to Connecticut to get his family. He returned with more settlers on May 28, 1800. In 1802, the town was named “Hudson” in honor of its founder, who remained a resident until his death in 1836. In 1806, David Hudson built a frame house along the main road north of the center of town. That house, at 318 North Main Street, is the oldest standing structure built in what is now Summit County.

Hudson grew as settlers began arriving, mainly from New England. One such settler was Owen Brown, a tanner, who arrived with his family in 1805. His son, John, who was five when his family arrived in Hudson, grew up here and stayed in Hudson into adulthood. John Brown would eventually lead a raid on Harpers Ferry and would be hanged for his efforts. His actions helped to set the stage for the trauma of the Civil War.

In 1826, largely through the efforts of David Hudson, a college was chartered here. It was named Western Reserve College, and it rapidly grew to such stature that it was known as “The Yale of the West”. Not only was this one of the earliest institutions of higher learning in the region, but it also boasted one of the first observatories to be built in North America: Loomis Observatory. Eventually, the college left Hudson, moving to Cleveland in 1882 and becoming what is now Case Western Reserve University. The old campus is now the site of Western Reserve Academy, a private co-educational prep school.

Also of importance to Hudson’s history was the completion of the Ohio and Erie Canal between 1825-1830. While the canal did not pass through Hudson, its presence through nearby Peninsula meant increased trade, industry, and development throughout the region. The canal was a key factor in the rapid population growth in northeast Ohio. In 1837, the Village of Hudson was incorporated in the center of Hudson Township and Heman Oviatt was elected the first mayor.

The period from 1850 to the outbreak of the Civil War was a boom time for Hudson. The building of the railroads in the 1850’s caused a large influx of people, money, and industry. Over-speculation in railroad stocks, however, would soon bring financial ruin to many Hudson citizens.

Hudson was also an active stop on the Underground Railroad, partly due to the presence of many abolitionists such as the Brown family. The town was generally anti-slavery, but those forces were divided between those who favored the immediate abolition of slavery and those who favored a plan to re-colonize freed slaves in Africa.

At the end of the Civil War, Hudson experienced prosperity, but with the removal of the college in 1882, the town’s fortunes changed. A fire in the industrial district in 1890 and a major fire in 1892 which destroyed Hudson’s downtown caused economic hardship. Western Reserve Academy closed its doors in 1903 and the town’s only bank failed in 1904.

In 1907, a native son, James W. Ellsworth, returned to his hometown after making millions in the coal industry. Sensing the town’s distress, he decided to help bring Hudson back to vitality by making it a “model town”. Ellsworth had elm trees planted throughout Hudson. He reestablished Western Reserve Academy, put wiring underground, closed the saloons, brought in electrical service, revamped the telephone service, paved the streets, and established the town’s first water and sewer system. As a final gift, he paid to have the Clocktower built in 1912. His son, Lincoln Ellsworth, was a noted American polar explorer. James Ellsworth joined with another reformer, Caroline Baldwin Babcock, to establish the Hudson Library and Historical Society in 1910.

Hudson thrived in the time since the Ellsworth era, and has managed to preserve much of its charm while experiencing tremendous growth as a residential community. Its New England atmosphere, together with its stunning architecture, has earned it a spot on the National Register of Historic Places. In January of 1994, the incorporated area of Hudson merged with the township to form one municipality. In 1999, the community began celebrating its bicentennial and started looking forward to the next millennium, still maintaining the traditions and values of its founders.