Gustave H. Grimm – Hudson Library
Delivery of holds is delayed due to the State Library of Ohio’s new statewide delivery service. Thank you for your patience and we will continue to keep you informed. More information >>

And the Maple Industry

Gustave Henry Grimm was born in 1850 in Germany and immigrated to Akron, Ohio, in 1864 where he met and married Esther Logan. He knew no English and could not read or write in English when he arrived to the United States. The young couple then moved to Hudson in 1870 and set about establishing roots in the community.

Grimm built a house at 55 Oviatt Street and briefly worked for John Chapman in his stove shop until the two had a falling out. His involvement in the community began with his service on town council and also the fire department and Masonic temple. Grimm grew weary of working for someone else and established the G.H. Grimm Manufacturing Company in 1882.  He partnered with local farmer Horace Clark and patented the dropped flue evaporator which allowed for more efficient boiling of liquids such as sap. Grimm began to market this new means of making maple syrup and also produced many other pieces of equipment that maple producers still utilize to make syrup.

During the 1880s, the maple syrup producers were beginning to organize as a professional association and Gustave Grimm became deeply involved in the formation of the Western Reserve Sugar Makers Association in 1881 and 1882. He was additionally traveling a great deal throughout the maple belt to promote the “Champion Evaporator” and wrote articles on maple sugar & syrup related topics such as whether one could tap maple trees in the fall as well as the spring. (Today we know it is possible but it taxes the tree and therefore, we do not often see trees tapped in autumn.) 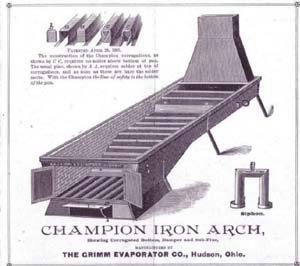 The World’s Columbian Exposition (also called The Chicago World’s Fair), was held in Chicago in 1893, to celebrate the 400th anniversary of Christopher Columbus’ discovery of the new world. Ohio sent a contingent of maple sugar producers to the fair. It is thought that Grimm went, but there is no documentation to verify this.However, it is significant that Horace M. Clark, Grimm’s partner, received the second place award for the best maple syrup in the world at the Columbian Exhibition. 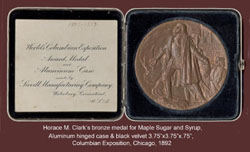 The 1890s also brought sorrow to the life of Gustave and Esther Grimm as two of their four children died of disease and accident and were buried in Hudson. It is not known why Grimm left Hudson and moved to Vermont in the late 1890s, but Vermont was a growing center for the maple industry. The maple syrup and sugar industries were growing and Grimm capitalized on this by establishing branches of his business in outposts of the maple belt: Montreal, Quebec and Rutland, Vermont .  One of Grimm’s branches was later bought by another in Quebec and came to be known as Dominion & Grimm. In Vermont, the company outlived Grimm and was recently bought by Leader Evaporator. At his death in 1914, his only surviving child, Nella took over management of G.H. Grimm Manufacturing Company and ran it successfully for many years. The Hudson branch of Grimm’s  company closed in 1945. G. H. Grimm’s company was the largest producer of maple syrup making equipment for 114 years. 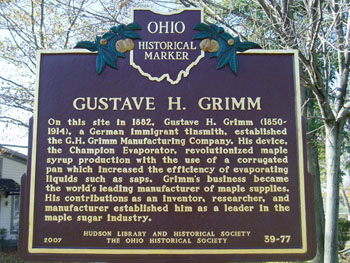