Adelaide Rideout Riggs – Hudson Library
Delivery of holds continues to be delayed due to the State Library of Ohio’s new statewide delivery service. Thank you for your patience and we will continue to keep you informed. More information >>

Adelaide Rideout Riggs was born in 1867 to Sarah Baldwin Rideout and Civil War veteran, Samuel Rideout, in Dorset, Vermont. After the untimely death of her mother, twelve-year-old Adelaide moved with her father, sister and brother to Hudson, Ohio,  where her father established a feed and implement business. Samuel Rideout soon married Mary Lane of Twinsburg, Ohio, and the family settled at 55 Oviatt Street.

Addie’s childhood in Hudson was typical for the time period. She and her siblings developed a keen interest in photography and the new invention of the bicycle. (Thanks to her brother, many images of late 18th century Hudson survive. His collection is housed in the Hudson Library & Historical Society Archive).

Adelaide was also a theological student at Western Reserve Academy and graduated in 1887. Addie’s family were among many who worshipped at the Hudson Congregational Church. As she grew into adulthood she became very interested in, and ultimately dedicated to,  the plight of the less fortunate.

A fellow Hudsonite and church member who felt similarly was William F. Cash. His father, Charles, was Hudson’s blacksmith. In 1890, both William F. Cash and Adelaide Rideout traveled to the Santee Indian Reservation in South  Dakota. Each felt a strong commitment to improve the lot of Native Americans.

The Santee Sioux Reservation had been established in the 1870’s, and many Native Americans had been forcibly moved to this desolate spot. On the reservation, well-meaning Christians sought to educate Native Americans, but many of these individuals thought of the Indians as savage heathens. 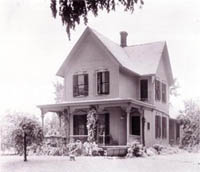 At their boarding schools, the missionaries, like the federal government, prohibited traditional Indian religious ceremonies. Indians were not allowed to use their own language, clothing or hair styles. The Santee Sioux children were taught to take on the ways of the whites and to assimilate. Many whites believed they had to “kill the Indian” in order to “save the man.” This process became a national policy of  “assimilation”  for all Native Americans.

One person who wanted to form a school to educate Native Americans to become missionaries to their own people was the Rev. Alfred L. Riggs. The Rev. Riggs founded the Riggs Institute and Santee Normal Training School  in order to train teachers on the Santee Reservation in the late 1870’s.

Addie Rideout and Will Cash worked at the Riggs Institute (renamed Flandreau Indian School in 1893).  Addie was employed as a teacher and Will as an Assistant Farm Superintendent. Addie made herself exceedingly useful and taught general English language, religious and homemaking classes.

In the Santee Sioux  culture there is a philosophy of  “giveaway” and great value is placed on generosity. The Santee Sioux are also known for their careful needlework, using porcupine quills and glass beads. At the Riggs Institute, the Santee children loved their teacher “Miss Rideout” and celebrated her by “giving away” to her the ornately beaded  purse seen here. Customarily, to celebrate an event such as a wedding or new child, instead of receiving gifts, one gave them away. In this manner, the gift giver would share his or her good fortune.

In 1893, Addie returned to Hudson with Frederick Riggs (son of Alfred)  who also was a teacher at the Institute. They were married in Hudson, Ohio and honeymooned on a camping trip to the Rosebud and Pine Ridge Reservations further west in Nebraska.

Communicable diseases such as tuberculosis were often associated with the close living conditions in boarding schools and Addie contracted tuberculosis shortly after her honeymoon.

Despite the best medical assistance, she died in March of 1895. Her well attended funeral ceremony was conducted by the Native American Pastor at Santee. He spoke of Mrs. Adelaide Rideout Riggs giving her life to work among his people.

Will Cash went on to marry another worker from Flandreau named Lettie. Shortly after Addie died, Lettie and Will moved further west to Oregon where they lived and raised their family.

Today the Flandreau School still functions and has the distinction of being the oldest Native American boarding school in continuous operation in the United States. It still receives some government funding from the Bureau of Indian Affairs.

The policy of assimilation and the legacy of Indian Boarding schools helped many tribes survive times when there was extreme poverty, disease and death on tribal reservations. Schools also sought to foster positive relations between differing cultures. Adelaide Rideout and Will Cash were Hudsonites motivated by selflessness and Christian principles. They sought to improve the lives of many.